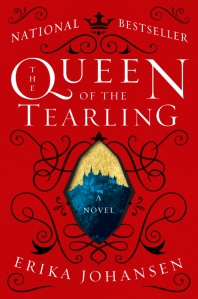 Even a book can be dangerous in the wrong hands, and when that happens, you blame the hands, but you also read the book.
― Erika Johansen, The Queen of the Tearling

The Queen of the Tearling is gripping, with beautiful writing and bold characters forming a powerful story.

At nineteen years old, Princess Kelsea already faces battles. Her life leading up to them hasn’t been easy; through each second of her anguish shines a powerful will for someone so young.

She’s been raised strictly in preparation for the throne. It made her childhood one of bitter solitude with cold foster parents who showed little affection. Later in the book we see how this discipline roughened her to be the queen her people needed.

A lover of beautiful sentences, I fell for Johansen’s writing style. Not only did it paint Kelsea’s struggles, it made me fond of the character despite her many flaws.

Some books are written so eloquently that they’ll pull you in for hours. You’ll be floating in a dream, bound by extraordinary prose. I don’t know how to describe Erika Johansen’s writing style, but if the plot and characters had been mediocre, I would have still finished the book because of how it was written.

But the characters weren’t mediocre. The villains had a touch of humanity that made me understand them. The heroes weren’t always likeable, either. It meant each character felt real and alive, regardless to their role.

I read The Queen of the Tearling three months ago. It may be dark and gritty, but I walked away with my mind buzzing, wishing desperately for more. Soon I’ll be getting the second book to immerse myself once more in this world painted with such perfect words.