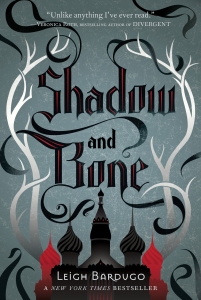 In Shadow and Bone, we meet Alina Starkov. Orphaned as a baby, she’s lived a quiet childhood alongside her best friend Mal. They did everything together until he became a Tracker and his focus shifted to outdoor activities, creating a divide between them.

Alina hasn’t recovered from this separation. Even when they both join the army, Mal’s popularity among soldiers and women causes her unrest. Not only is she mildly jealous, but she feels he’s known his calling all along while she followed him blindly—until their troop crosses the Unsea, a cursed land shrouded in darkness.

Only one Grisha has power equal to hers in rarity. The Darkling summons shadow, like Alina summons light. He is respected and feared by everyone; though he works for the king, the Darkling is the one they fear in the Little Palace.

Alina has caught his attention, so he takes her in for training. He watches her power develop, impatient for her to reach full potential, and later we learn he’s got a motive. If Alina keeps training for him, her power will cease to be hers.

The Darkling has been sending parties to find a magical stag. If caught, the stag’s antlers will create an Amplifier that’ll increase Alina’s power…for his purposes. Upon learning he has plans for her, she escapes. In her flight she runs into Mal, and together they trek through the snowy land of Tsibeya.

Shadow and Bone ends on a note of escape and fear: Tsibeya can’t keep the Darkling away. He catches the stag and forces Alina to wear the Amplifier, essentially claiming her power for his purposes. But is there a chance she can use her ability to get away?

I found Shadow and Bone to be a slow read at first. The story didn’t sweep me away until Alina was captured for her ability. Even the slow scenes were a treat to read, because Leigh Bardugo has a gorgeous style. She painted pictures for me without getting too wordy; the dialogue provides satisfying insight on characters’ personalities.

Having read the second book, Siege and Storm, I realize the worldbuilding in Shadow and Bone lacks a bit. Don’t let this discourage you from trying the book; the series gets better with each installment.

Bardugo has become one of my favorite authors! Shadow and Bone is a tale worth reading, sweeping readers into a cold, snowy dream. Give it a try if you like fantasy and worlds where power takes  part in everyday life, inciting greed and darkness—but also awakening fighting spirits.

4 responses to “Review: Shadow and Bone by Leigh Bardugo”