Yup, you read that title correctly. TV shows – and I’m talking the real ones, the epic ones, not the Disney ones – can help immensely with plotting out your novel.

Yeah, go ahead and laugh. I promise I won’t be offended. Finished now? Great.

I’m going to use Supernatural as an example, because that’s a show I’ve just started watching (Yes, I know I’m way behind) and I really like the character arcs. 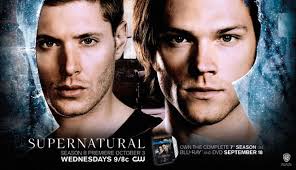 If you haven’t seen it, Supernatural is the story of two brothers raised by their father to fight all manner of supernatural creatures. The series also holds a bit of a detective edge since they have to figure out what sort of monster is haunting the area before they can kill it, and because, amidst all this, Dean (older brother) and Sam (younger brother), are also searching for their aforementioned missing father.

Yeah. These poor boys have a lot on their plate.

As a huge fantasy nut, I love the action in this series. There’s a new monster almost every show – from shapeshifters to the Grim Reaper – and Sam and Dean are totally boss when fighting them.

But what I love even more than the action, is the emotion of the story, the beautiful character arcs and the bond between the brothers. How they’re constantly killing evil spirits for normal citizens, all while battling the demons of their own pasts. I love how Sam takes care of Dean and Dean takes care of Sam and how, even though they have their share of arguments, they’re always there for each other.

On to how this can help with writing: The overall story is that of two monster-hunting brothers searching for their father. But, as I said above, there are supernaturals, too, new ones nearly every show. These create a host of mini-plotlines, keeping the action moving as our boys travel cross country, looking for their dad and learning to relate to each other.

And those mini-plotlines are exactly what we need in our novels. You have the overall plot “Character wants this and decides to do this to get it,” and then the little obstacles and helps along the way – the little tidbits you slip into the story, arresting the reader’s attention, while building up to the final climax (which I haven’t seen in Supernatural yet, so don’t spoil it for me if you know).

The obstacles/helps can come in the form of people (in one episode, Sam and Dean find an old friend of their father’s, and she helps them with a case) or difficult situations (…every single episode, but anyway). Sometimes, the smaller plotlines end during the story; they’re wrapped up in a pretty little bow and then we move on. Other times, they open fresh nuances in the overall plot, for instance the end of the very first episode and a certain discovery about Sam in the fifth. Both of them revealed more about the relationships of the characters, kept the story moving, and built carefully on the leaning tower that is every story, leaving me riveted, breathless, and desperate for more.

Which, of course, is the very feeling I want to inflict on some poor reader someday.

People always say the best way to master something is to study it, learn from the greats (practice, too, but we’re not talking about that today). So the next time someone accuses you of watching too much TV, laugh, roll your eyes like they simply do not understand, and inform them in the kindest way possible that you’re conducting writing research.

One thought on “Guest Post: How TV Shows Can Help You Plot Your Novel”