I’m excited to announce that you can now purchase Dissonance on Amazon as an eBook. It’ll be out in paperback hopefully this week, and I’m going to put it on nook too–I’ll let you know when this happens.

When I saw my name on Amazon as an author, I literally started to cry. I’ve been waiting so long for this. I’ve edited so many times and really believe I’ve made this book as perfect as I could. I hope if you have some free time, you’ll give Dissonance a chance; maybe you’ll like it. Allie’s story is (I’ve been told) heart-wrenching, engrossing–I kept two people up with this novel before it was out, which is definitely a good sign.

Click here to find it on Amazon! It’s available as an eBook right now for $2.99 so if you buy it you might help me get a cup of coffee so I can start on my next novel. *wink wink*

If in doubt, read Kayla’s review of Dissonance on her blog! I really appreciated her comment about Allie’s behavior:

Allie’s reactions are normal. She reacts the way a fifteen year old girl would. She freaks out at appropriate times and she starts screaming at the exact right moments. She acts like a human girl, which is sometimes what I miss in books. Mundane reactions to things.

It’s important to me because I really want my characters to act realistic. I hope you think the same way if you read it.

If you read Dissonance, please let me know what you think! Thanks for stopping by! I hope you stick around for my next adventure in publishing! 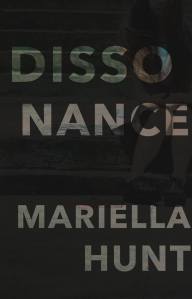 Fifteen-year-old singer Allie Grant lives crippled by her illness. Though kept in isolation, she’s never alone: A spirit named Song lurks in the silence of her bedroom.

When Song reveals its dark nature on the night of her recital, the show ends in tragedy. Verging on death, Allie’s taken in by an uncle she’s never met. Julian claims to be a Muse with power over music and answers that’ll heal her.

It isn’t long before Allie suspects her uncle has a secret that’ll change her very identity. But with days left to live, she might fade without learning the truth…like the finishing chord of a song.

2 thoughts on “Dissonance is now available on Amazon!”