Based on what’s known of Jane Austen’s life, Becoming Jane is a heartbreaking and beautiful film in which two passions clash.

Jane is introduced in the first scene as a dedicated storyteller. She’s deep in concentration, whispering words as she writes them. The most poignant word haunted me as I watched the film: propriety. That’s ironic, because in her day it was frowned upon for women to be writers—it was improper.

She isn’t thinking about marriage, anyway. She cares only for her novels, determined to feel nothing romantic—

Until she meets a young lawyer named Tom Lefroy. Society doesn’t want them together. For a great deal of the film, even Jane isn’t sure she wants them together. Though it was powerful, Jane’s romance isn’t what made my own heart ache.

As a writer, I cringed at the prejudice Miss Austen endured. Jane seems most alive in the scenes where she’s writing in her room. Society scoffs at novels, and a woman who writes is at a disadvantage.

By the end of the story, I found myself reflecting on three things:

In the movie, Miss Austen made an unselfish decision. It’s a powerful tribute to the author who captivated so many readers, shifting the focus from characters to their own author. 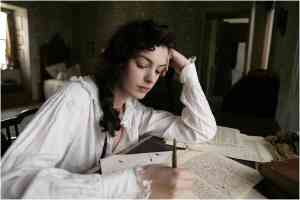 Not all storytellers are the same, but this movie tells a hard truth: Most of us will feel alone or misunderstood at some point in life. We might not end up like Jane, but it’s a passion that demands our all.

Becoming Jane almost made me cry. The heartbreaking outcome of Jane’s only love makes it sink in how weak love makes us, and what we may have to give up for it.

I recommend this film, but make sure to bring your tissue paper.